We used effective hoarding design to turn a construction site into an impactful way of communicating our client’s role in transforming the city of Manchester.

As part of a tramline extension in the city centre, United Utilities had to service the Victorian sewers before the new rail links could be installed. Manchester is one of the busiest and fastest-growing hubs in the UK, so when we were approached to create a hoarding design for a high-profile retail and business area, we knew our design had to generate the right kind of impact.

Maintaining the visual appeal of the area while this key work was being undertaken was extremely important. To make the site as attractive and interesting as possible for passers-by, we wanted to help the client create a positive connection with the community and generate awareness about the company’s role in transforming Manchester.

Our solution served multiple purposes. Not only did the hoarding allow us to showcase the client’s new brand for a captive audience in a prime location, it was also a company pilot for the rollout of future customer communications in other high-profile urban areas.

With a cleaner and more visual-focused brand than its previous incarnation, our creative team was able to commission a series of impactful professional photographs featuring employees carrying out essential work for United Utilities’ customers. By highlighting the human element behind the actions, we were able to help the client tell a story about their commitment to making a difference, rather than just focusing on the work going on behind the hoarding panels.

The design was also dotted with the company’s own archive images, depicting the engineering feat of Manchester’s sewer men from a bygone era. This helped to give further meaningful context to United Utilities’ efforts.

Our designs included messaging that was in line with the refreshed brand positioning – a friendly, helpful and responsible investment to improve the network. United Utilities’ slogan of “Helping life flow smoothly” really comes across in the wayfinding and ‘business as usual’ messages and illustrations we included as part of the project.

Both the design and overall management of the project were praised by our client. We also worked in close collaboration with Manchester City Council, adhering to a strict non-peak installation schedule to minimise disruption.

It’s simple and striking, again Parker Design have really pulled out all the stops and when briefed for something different and engaging, they delivered. It works an absolute treat!” 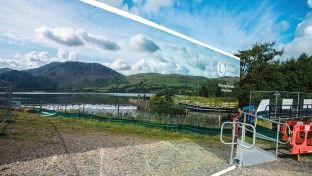 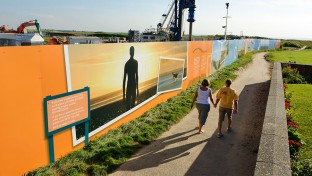 After the success of a number of similar projects across Cumbria and Lancashire, the communications team at United Utilities asked Parker Design to work with them to produce another series of construction hoarding signs. This time they were to be used near Crosby Beach on Merseyside.