Striking a balance between capturing a historic building’s significance and the energy of its redevelopment, this urban regeneration hoarding turned the past into the future for local traders and residents.

Deep in the heart of Cheshire, Crewe’s Market Hall is full of historical significance: in the mid 19th Century a Cheese and Cattle Fair Committee was established with the aim of making Crewe a local centre for the sale and distribution of quality cheese.

A few years later, builder and railway contractor John Hill financed a permanent home for the cheese market – the new Cheese Hall. Opened in 1854, the Hall had its own railway branch from the main line for transporting the produce.

Throughout the rest of the 19th Century, and into the 20th, the Hall continued to be used as a market and a focal point for the people of Crewe and the wider region.

Fast forward to 2019 and the Market Hall was ready to undergo its biggest transformation since the 1970s. Part of a £50m investment programme in the town centre, the regeneration of the Grade II-listed Victorian Market Hall would play a major role in repositioning Crewe as a prime leisure and retail destination, brimming with a range of high quality local traders including fresh food retailers, independent eateries, artisans and makers, while also featuring events and pop-up stalls.

The brief was to create an urban regeneration hoarding design to help generate awareness and interest in the redevelopment work, as well as to transmit the important legacy of the Market Hall and its exciting new future. With plans for the regeneration work to take 12 months, the hoarding had to be durable and maintain its physical quality and visual appeal, all within strict budget guidelines.

Focusing on the design first, we turned the past into the future, striking a balance between capturing the building’s heritage and significance and also the energy of the new development. The design has an elegant and premium feel to it, thanks to dark blue tones and a font style that add gravitas and feel almost regal, perfectly in line with the reputation and stature of the historic building.

By reversing out text and original illustrations of the building we added depth and intensity to the design. 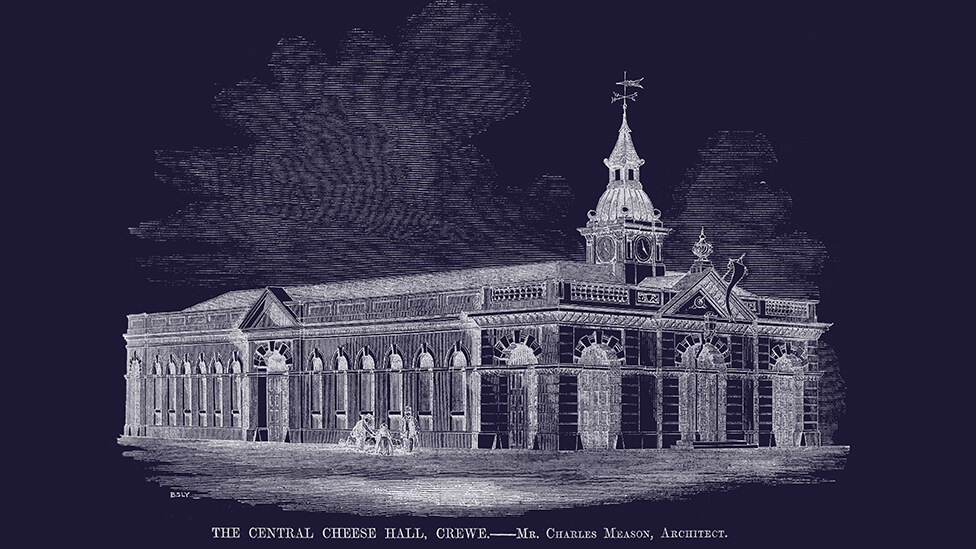 To bring to life the Hall’s past, we asked our client to dig deep in the local archives: including 19th Century newspaper clippings in the hoarding helped us capture the spirit of the building and its heritage.

“Opening of the New Cheese Hall, at Crewe.

This magnificent Cheese Hall, built by John Hill, Esq, pronounced by the press and

The proprietor of the New Cheese Hall, J. Hill, Esq., has erected inside the building a number of neat butcher’s stalls,

which were occupied for the first time last Saturday. The hall is very commodious (…)” 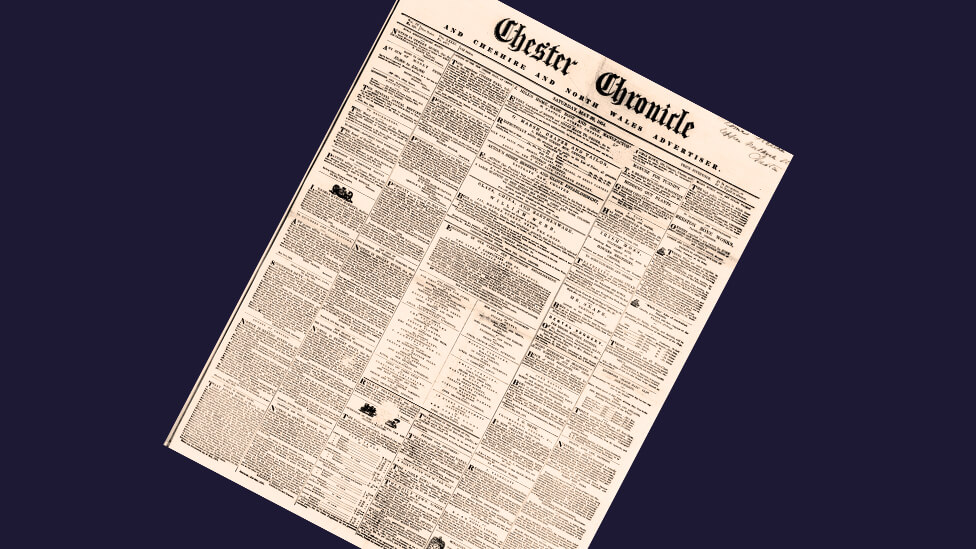 To bring the past into the future, the hoarding also includes CGI artist impressions of what the Market Hall will look like after the regeneration work has been completed.

To truly showcase the exciting redevelopment and the robustness required to keep it looking at its best for the full duration of the works, we recommended the use of aluminium composite panel (Dibond), which provides the quality needed and is also the most suitable for potential relocation of the hoarding in future.

Thanks for all the work put into this.”

We arranged the printed Dibond panels in a horizontal band to create a seamless graphic. With the hoarding being half height, the boards contain top line info that acts as a CTA to garner interest from traders, and invite pedestrians to take the information in as they walk past. We have been working with United Utilities for a number of years on – amongst many other projects – hoarding board design. As an experiential agency known for our outdoor marketing solutions, we turned a construction site into an engaging visual journey through time.